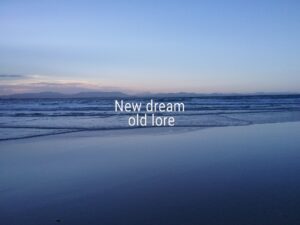 ‘According to the stories of my father and various Elders from the north coast, the Rainbow Serpent snakes round Byron Bay in a radius of approximately 50 kilometres. The head comes to Broken Head and the tail is up near Brunswick Heads. Within that area, a long time ago, our people used to come from all over Australia to Byron Bay. They came from as far away as Tasmania, Bathurst Island and the Kimberley. They came here to have big lore-making ceremonies. At Cape Byron, where the lighthouse now is, there was a welcoming bora ground (a sacred ceremonial ground). The Bundjalung Elders would sit up on the Cape and welcome the people who came by canoe and the inland walking tracks. On arrival, everyone would have to walk up to the Cape to the welcome ground and sing the story of where they came from and perform traditional dances. Around 2000–3000 people would gather in Byron Bay and everybody was welcome. The men would make camp from the lighthouse, going north right up towards the Tweed River. The women camped south of Cape Byron down to Lennox Head and sometimes as far as the Goanna Headland at Evans Head. You could image the lore-making ceremonies, especially the dancing with all the paints and feathers. Oh, it must have been wonderful.

Extract from ‘Byron Bay the History, Beauty and Spirit’ (revised eBook, 2017), taken from a recorded interview with Lorraine Mafi-Williams, Di Morrissey and Lindy on Bay FM 7 December 1997. Lorraine Mafi- Williams was a lifetime student of Auntie Milly Boyd, an indigenous woman of high degree who spoke four languages: Bundjalung, Githrabaul, Knarkbaul and English. Milly Boyd was the keeper of the lineage and the lore and served the North Coast for many years. Milly Boyd was the great-great-granddaughter of Elemani who lived in the first 50 years of the English occupation. Elemani lived near the border of NSW and Queenslandand may have never performed her customary responsibilities because of the white settlement and massacre raids on her people.

In Minjungbal, a dialect of Bundjalung, Byron Bay was known as Cavanbah, meaning meeting place.

Byron Bay the History, Beauty and Spirit’ acknowledges- the ‘Black War’ that raged throughout Australia in the 1800’s, many Koori and European lives were lost. The Stolen Generation. The social injustice experienced by Indigenous Australians. The process of reconciliation, and the necessity for positive change, forgiveness and love.