Author Peter Duke has resided in Byron Shire since 1998. Originally from Sydney, Peter has a background in education and sales. Since his move to Byron Bay, and following several year’s research, he curated the Byron Bay Historical Photograph Exhibition at the Byron Bay Surf Life Saving Club, 2005

In December 2010 Peter published his first book, ‘Byron Bay the History, Beauty and Spirit’, a beautiful hard cover coffee table book. The book was quickly embraced by the local community and became Byron Bay’s #1 best-selling book. In 2015 when the book ‘sold-out’, an updated downloadable format was made available (pdf), followed by a second print run in 2016.

Peter second book, ‘A Surfer’s Search for Spirituality in Byron Bay’, is a spiritual travelogue he began writing in 2011 following the Byron Bay publication. The story begins in 1998 upon arrival here and traces the past 24 years of findings.

The book is now complete, and the author is seeking funding to print.  Donar’s welcome. 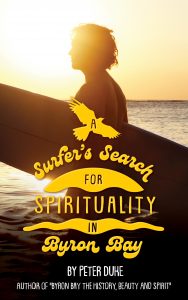